Versatile gauging takes a step up 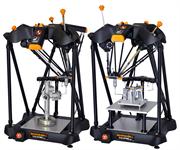 Following the widespread success of the Equator™ 300 gauging system launched in 2011, supported by a turnkey installation service and global support network, Renishaw has expanded the range with the new Equator 300 Extended Height system. Developed in response to customer needs, it provides users with extra fixturing space below the measuring volume.

This new variant allows components to be transferred onto the machine on their machining fixtures and also allows the use of automated systems such as robots and conveyors. The system can inspect features on parts up to 300 mm tall, with rapid changeover to smaller parts using an extended fixture plate spacer.

Since its launch Equator systems have been installed in multiple automotive, aerospace, medical and electronic companies across the world. Users have been attracted by the reduced purchase, maintenance and fixture costs compared to traditional gauges, plus the ability to gauge multiple parts and to re-program for design changes. Equator 300 Extended Height systems have already been supplied to customers looking for the flexibility allowed by an extra 150 mm height below the measuring volume.

In seconds, users can load parts that are still attached to the fixtures used during machining operations. The Equator fixture plate can be easily exchanged for other plates, each mounted to the Equator base using highly repeatable three-point kinematic seats. The plates can also be exchanged for fixture plate spacers, allowing smaller parts on their own fixture plates to be gauged in the same measuring volume.

Since the launch of the Equator gauging system in 2011, many customers have also taken advantage of the turnkey programming service offered by Renishaw and its partners. Using Renishaw's comprehensive MODUS™ software, experienced engineers work closely with a customer to generate programs that allow a wide range of parts to be gauged on a single Equator system.

A customer's shop-floor staff then simply select and run programs using the intuitive Modus™ Organiser operator front-end software, requiring little or no training. The Organiser software can report gauging results with a simple ‘pass' or ‘fail' message, while also allowing a full inspection report to be viewed.

Reflecting the international nature of many modern manufacturing organisations, Equator customers have been able to take advantage of Renishaw's extensive network of Equator support engineers. Projects initiated in one country or region can be easily transferred and locally supported in multiple locations. Renishaw now has approaching 70 regional support offices and multiple approved partners, covering every industrialised area of the world.

Equator is a radical alternative to traditional dedicated gauging, filling a gap in the market never before addressed. The patented low-cost design, unique in construction and method of operation, is capable of high-speed comparative gauging for inspection of high-volume manufactured parts. Equator is a lightweight, fast and highly repeatable gauge that operators can use with ‘push-button' simplicity. Equator can switch between parts in seconds, perfect for flexible manufacturing processes or accepting parts from multiple machines.

Equator's innovative and highly repeatable gauging technology is based on the traditional comparison of production parts to a reference master part. Re-mastering is as swift as measuring a production part and immediately compensates for any change in the thermal conditions of a shop-floor environment. Equator can be used in factories with wide temperature variation – simply re-master and the system is ‘re-zeroed', ready for repeatable comparison to the master.

Master parts do not need to be expensive custom parts like those used on a traditional gauge; users simply take a production part and measure it on a co-ordinate measuring machine (CMM) to establish the variation from CAD or drawing nominals. The results from CMMs can be configured to be used directly within the Equator software.

Effectively, the calibrated absolute accuracy of the CMM (often located in remote temperature controlled rooms to ensure accuracy) can be ‘extended' onto the shop floor to provide calibrated traceability to Equator measurements. With the calibration file loaded into the Equator software, measurements made in the Equator system can be referred back to the CAD or drawing nominals.

Compared to dedicated gauging, Equator cuts fixture costs considerably. By using fixturing that positions parts to within 1 mm of where the master was measured, there is no significant effect on system repeatability and the need for expensive precision fixtures is removed.

Further versatility is offered by the Equator-specific stylus changing rack, included in the purchase price of an Equator system, which allows automated in-cycle changing of SH25 stylus holders. The SH25 holders couple to the industry-standard Renishaw SP25 probe, allowing Equator users to swap the stylus configurations without re-qualifying each time. Up to six stylus combinations can be loaded into the rack at any time and they can be used on a single complex part or with multiple parts of varying geometries.

Equator is unique in its design and method of operation, and has already changed the thinking of hundreds of production engineers, making Equator the new gauge of choice. The versatility and repeatability Equator offers is re-defining the world of gauging.