The recently established Mexican subsidiary of Renishaw, the global engineering company, recently held the formal inauguration of its new facility based in San Pedro Garza García.

The recently established Mexican subsidiary of Renishaw, the global engineering company, recently held the formal inauguration of its new facility based in San Pedro Garza García. The inauguration was attended by invited guests from industry and educational establishments, who were welcomed by Leo Somerville, President of Renishaw Inc., Alejandro Silva, Director and General Manager of Renishaw Mexico, and Ms Sarah Hildersley, Director of UK Trade & Investment at the UK Consulate in Monterrey.

Speaking at the opening, Ms Hildersley said, “I have no doubt the opening of these new offices will give much success to Renishaw. It is clear that there is great demand in Mexico to obtain the best technologies, and the fact that the United Kingdom and the United States can work together with Mexican companies to provide them with everything they need right here in Mexico is definitely a win - win relation.”

The day after the formal opening, Renishaw Mexico also held an Open House for customers and other guests at its new facility, at which there were demonstrations of a wide range of Renishaw's latest metrology products. The company also held hourly seminars on the subject of process control for advanced manufacturing and the latest advances in the field of industrial metrology. 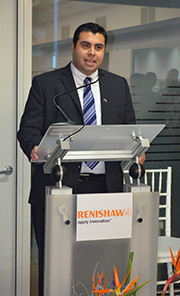 Alejandro Silva says: “I'm confident that with Renishaw's leadership in the market and innovation as new technologies emerge, we can make a difference in Mexico.”

Silva had been operating as a distributor of Renishaw's products in Mexico since 2007 under the trading name Metric Precision, but in March 2012 Renishaw opened the fully owned Subsidiary office and began trading as Renishaw México, S. de R.L. de C.V.. The office is well located to give support to the rapidly expanding Mexican and Central American customer base, including businesses in Costa Rica, Guatemala and El Salvador.

Mexico is the number one exporter in Latin America to the US, with the vast majority of everything manufactured going to the United States, mainly for the automotive industry. Currently, Mexico is investing heavily in delivering added value to the manufacturing industry, such as assembling complex parts, quality control and minimising manufacturing costs.